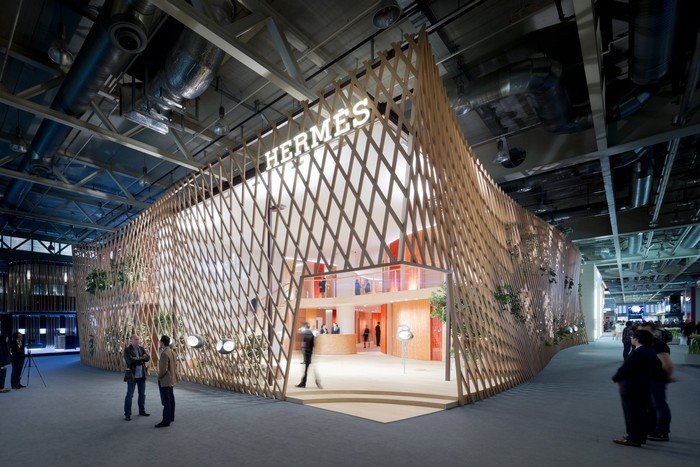 From the most luxurious to the most basic to the one that generated maximum buzz, here are three examples of some great exhibition stands, not designed by us but very much appreciated by us!

1] The Hermès Exhibition Stand at Baselworld

When it comes to exhibiting at Baselworld, The World Watch and Jewellery Show, you really need to pull it out of the bag and that is exactly what Hermès did for their stand. Sitting alongside the likes of TAG Heuer, Omega, Bulgari and pretty much every other luxury watch and jewellery brand, Hermès knew that their temporary exhibition stand needed to shine.

As much as we would love to say that this was our own, the task was given to architect Toyo Ito, to project lightness, peace, stability and ethereality! No mean feat. Toyo cleverly used the core brand values of Hermès, in particularly the special care taken to respect nature and naturalness in a now money based society. He used natural materials such as wood and natural-dyed textiles in order to harmonise with the spirit of Hermès.

The result looks like a grand standalone ship! Showing that the creative possibilities for designing a temporary exhibition stand are endless!

This is experiential marketing at its best. This exhibition stand is so simple yet the creative behind is it just spot on. It was designed by Parker Design, an exhibition stand design company after it became apparent that 71% of people in the North West admitted to flushing things down the toilet that didn’t belong there. To raise awareness of the ongoing issue of clogging up the North West sewers, the Big Bog Diary Room was born, ready for the people of the North West to confess their loo sins.

The sinner’s confessions were shown on large screens outside the Big Brother style diary room, thus creating buzz and excitement and social media shares. Bingo! This is the perfect example of how a stand doesn’t need to be fancy with a huge budget spent on it, a creative brain is all you need and then, anything is possible.

Another example of a great exhibition stand that attracts people to it but that hasn’t cost a fortune is a pop-up bar. This particular one has simple apple crates fixed to the wall filled with bottles of cider, hanging lights draped across the top, rustic barrels for seating. Pretty much all the basic trappings that we mention a lot in our blogs, which give the stand a particularly laid back, cool yet welcoming feel. The addition of free flowing booze always helps too!

Search
Recent Posts
How to Draw People to Your Exhibition Stand
Holding Your Very First Art Exhibition? Here Are Some Top Tips You Need to Know
Science, Sustainability and Exhibitions
The Do’s and Don’ts When Trading at Exhibitions
Categories
Copyright 2016-19 Temporary Walling from Conex.
07742957684 is a business rate number charged at 3p - 18p per min' from landlines and 6p - 51p per min' from mobiles.